In the early 1950s there were two news stories one year apart about UFO-related court cases. We'll take the later one first, since it involves an alleged flying saucer crash.

Debris from US government-launched balloon projects has been found since well before Roswell, from broken Rawin targets to Radiosondes. It's rare, but sometimes the debris has conked people. Here's a better documented case from 1963.

The 1952 legal complaint was about an early attempt to duplicate flying saucer performance and technology.

Dateline: Feb. 7, 1952, New Orlean, Louisiana, the the injured party, one Evelyn West, a celebrity who was interested in furthering a UFO research project. 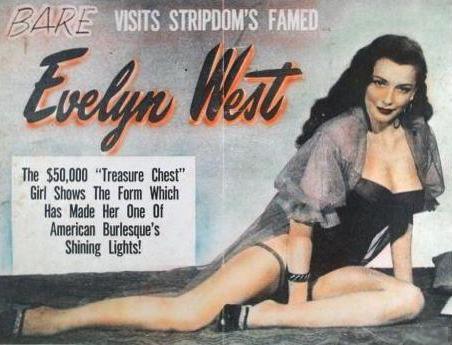 There's not enough information to determine if she was the victim of a con man, or merely an inept inventor with big dreams. Sadly, there was follow-up to the story, but Sir magazine Feb. 1956 featured the article, “'Treasure Chest' West and the Nudists,” which was focused on West’s controversial role as a proponent of nudism. It did mention the flying saucer investment lawsuit in passing, but didn’t provide an update on the outcome.

What these two 1950s saucer lawsuit stories have in common is that there's no further record of either of them. Evelyn West was real, and quite famous, but we were unable to find a trace of any person named Ferdinand Hackover or an alleged inventor by the name of Steven Vitko.

True or not, the stories are good examples of the game the newspapers played, exploiting saucers as serious news, but then playing them just for laughs. They don't spend much time sorting out the details of a novelty story from yesterdays news. What really mattered was selling newspapers today.

As with so many of the most interesting UFO cases featured here at The Saucers That Time Forgot, Project Blue Book has no file on any of these incidents.
By Curt Collins - February 13, 2020