Weather balloons were nothing new in the 1940s, and had been flying since the 1890s without causing much trouble - until the flying saucer fever of the 1940s.


In March 1953, Captain Edward Ruppelt prepared "Project Blue Book Special Briefing For Air Command," a lecture on the status quo of the Air Force's UFO investigation.  It included balloons in a section discussing common generators of false saucer reports. Some sightings were indeed balloons, but an AF study showed that during two months of peak "saucer fever," only about 14.5% of balloons launched had generated UFO reports.
The following is a collection of news clippings from 1952-3. All these flying saucers reports were explained as balloons - before being reported to the Air Force.


What these stories can tell us is that these Identified Flying Objects-to be can sometimes generate some reports with some unearthly sounding characteristics.

In a follow-up piece, we'll take a look at the reports and excitement from what was flying in 1954.


Airboy #88, June 1951 features a little-known UFO story, "The Great Plane From Nowhere!" The 13-page story features no credits, but it's believed to be illustrated by Ernest Schroeder. You don't need to know much to get started. Adventurer Davy Nelson, aka Airboy, was the son of an aviator. His miraculous plane was named Birdie. In our summary we've renamed some of the characters just for fun. 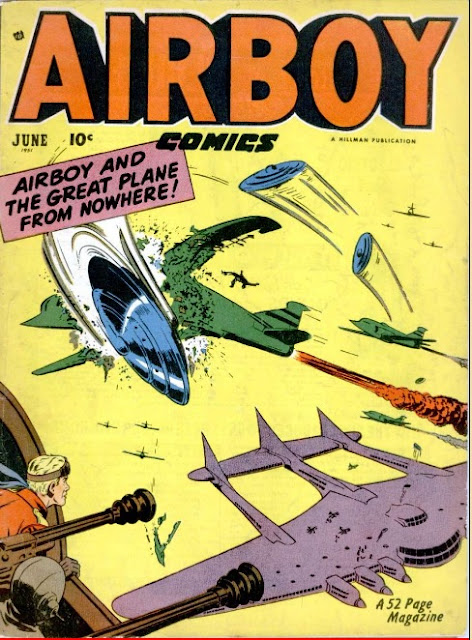 The story begins with Professor George Adamski observing a spaceship from his observatory in atop Mount Palomar, California. 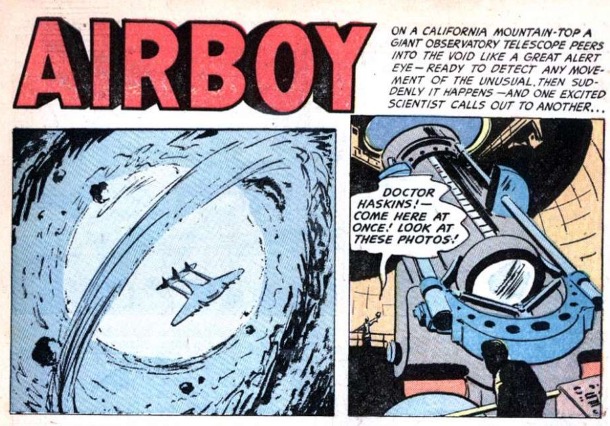 Captain Thomas Mantell is sent in pursuit of the object, but it is too high.

Airboy is called in by the Pentagon, and after they modify Birdie for the high altitude flight, he approaches the strange high-flying craft. He's pulled into it. Abducted! 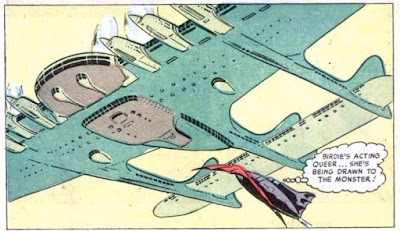 Airboy becomes the first Contactee. He learns they fly the saucers and have come here after a natural disaster destroyed their world. Their ship is a flying city, Argus. He has been chosen to deliver a message to our world from the visitors, that they come in peace and are bearing gifts. 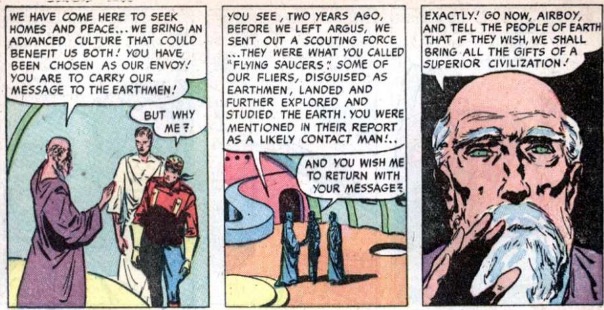 After the nations of the world decide to welcome the people of Argus, a landing site is chosen and Argus begins to descend. Earth's fleet of planes sent to escort them, but without warning or explanation, Earth attacks! 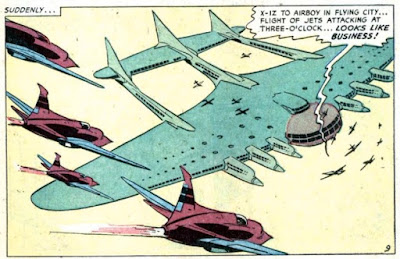 Airboy sides with Argus and gives them military advice on how to use their unarmed saucers to defend against the military aggression of the people of Earth.

Argus is saved. Perhaps realizing that 1950s Earth was not ready to accept extraterrestrial immigrants wearing dresses, the people of Argus make other plans. Airboy goes back home, but we aren't shown the consequence of him siding with the aliens. All's well that ends well.

This story was published in 1951, a year before George Adamski's Nov. 20, 1952 close encounter with Orthon from Venus, another benevolent visitor here to share wisdom, peace and knowledge from beyond.

1952 was the year that put flying saucers on the map, but it was so busy that many reports were never investigated by Project Blue Book. The morning of October 17, 1952, a brilliant flash was seen in the sky in parts of Louisiana and Mississippi, and reports from witnesses came in of a mysterious fireball zig-zagging in the air, or an exploding airplane, or an attacking flying saucer. 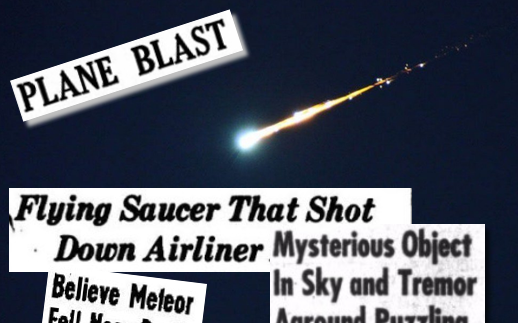 The event made news, especially in the two states where it had been seen. From the Mississippi coverage:

On the Louisiana side of the Mississippi River, about 30 miles north of Natchez. Miss.. Deputy Sheriff Rosy Massony of Tensas Parish said "an awful jar shook windows in St. Joseph and Waterproof." The Tensas Parish sheriff's office is in St. Joseph. "Some of our boys told us pots and pans were rattled in kitchen shelves" Massony said. Massony said others who said they saw the flash were two Negroes driving an early morning grocery truck near St. Joseph. They said they stopped the truck when it looked as if the fireball was heading toward them. Massony said they ducked under the dashboard. In New Orleans an airport porter declared "the flying saucer" chased him to the sea wall.

Meanwhile, the meteorite had the spotlight. Radio Station KALB at Alexandria. La., said it had received reports from over Louisiana of an explosion or flash. One person told the station that he heard an explosion that "sounded like the blowing of a safe," and another said there was a "blue vapor trail" at about 14,000 feet. Sounded a bit like flying saucer stuff! 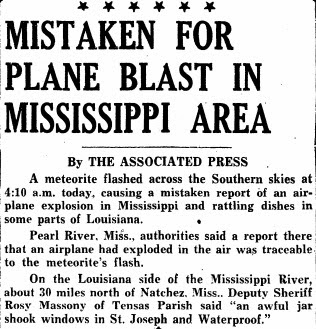 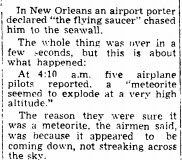 Coverage of the story varied, depending on the information each paper had at the time the story went to press or the editor's appetite for sensationalism. 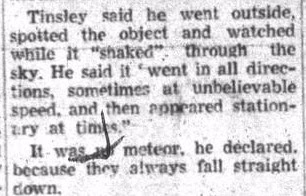 The earliest story to get a good handle of the facts was from Alexandria, Louisiana.

Meteorite Excites Dixieland. A brilliant flash appeared in southern skies early today and authorities, here probably was caused by a meteorite. The bright light was seen by witnesses as far away as Shreveport, in the north- west, of Louisiana; and another report came from an air-line pilot who said he saw the flash while flying 50 miles north of Mobile, Ala. Buildings were reported lightly shaken at Natchez and Summitt, Miss. A long-distance operator in Jackson, called to ask if there were any reports of an explosion said the aerial explosion occurred about 4:10 a.m., approximately the same time buildings trembled in the two Mississippi cities. Persons saw the flash In Louisiana felt no concussion, however, and police said no sound was reported.

Dr. Joseph F. Thompson, associate professor of astronomy and mathematics at Tulane University, said "the phenomenon probably caused by a meteorite" with "explosive tendencies." Dr. Thompson explained "burn up when they enter, the atmosphere and terrific heat stirs up inside the meteor core, When these gases certain temperature, their pressure can be enough to explode the meteor, causing terrific brightness."

Local descriptions of the fireball varied from "it sounded like someone blowing a safe" to a report from Overton street where a woman reported she thought "the moon done slipped." C. Dupuy, of Poland, said a "light of great intensity" flashed over the area about 15 miles high. He said the light was so bright "I could have picked up a pin off the floor." Mrs. W. T. Franklin of Alexandria said she saw the trail of light near an explosion. The blast was followed by smoke-like colored rings, she reported. Other residents in the area reported seeing the flash and "colored smoke rings" in the sky after the fireball disappeared. Mr. and Mrs. Roy Caubarreaux, of Cocoville, between Marksville and Mansura, said they were awakened by the bright light.

Once the facts were in, the excitement died down, but the story had a last gasp, as a treasure hunt for meteorites.


As with so many of the most interesting UFO cases featured here at The Saucers That Time Forgot, Project Blue Book has no file on this incident.