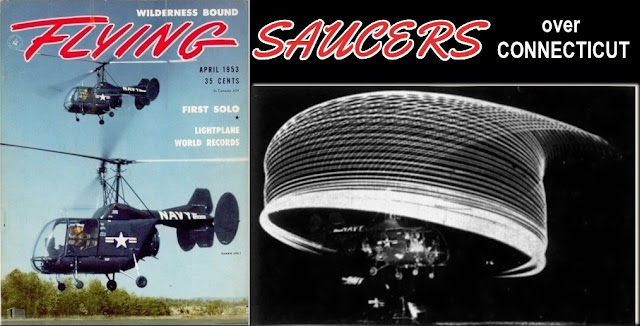 UFOs from the start were suspected of being secret military aviation projects. That's what Kenneth Arnold said he initially thought about the nine objects he saw skipping across the skies like saucers in 1947, and many others speculated along the same lines. The development of the atomic bomb had been kept secret from the public, and many thought flying saucers were another technological breakthrough. The Cold War between the US and the USSR was on, so the concern was who was flying the saucers - us or them?

In a previous article, 1950 Disclosure: UFOs are Made in the USA, we looked at how Henry J. Taylor, a major news commentator and columnist, made an amazing announcement in 1950 that flying saucers are real, and they are US military secret projects. He wasn't the only one suggesting it, and the rumors seemed to be confirmed in Oct. 1955 when Donald A. Quarles, the secretary of the Air Force, disclosed that aircraft were being developed, "a new phenomenon in our skies and under certain conditions could give the illusion of the so-called flying saucer."

There were many military projects over the years mistaken for flying saucers.
Here's another one reported in the Connecticut skies in 1954, a US Navy aircraft project.

With lights mounted on the tips of its rotor blades, a Kaman HTK-1 helicopter has been inadvertently assuming the role of "Flying Saucers" in the night skies over northern Connecticut. Under a contract with the Navy's Bureau of Aeronautics, Kaman Aircraft Corporation is conducting a "Rotor Tip Light Study," to determine the feasibility of lighted rotor blades as a nighttime aid to other aircraft and as a help in night formation flying of copters.

A more detailed account was printed in the U.S. Naval Institute Proceedings, July 1954:

Flying Saucers over Connecticut Bloomfield Conn. - Reports of "Flying Saucers" in the night skies over northern Connecticut, were revealed today by the U. S. Navy and Kaman Aircraft of Bloomfield to be a Kaman HTK-1 helicopter equipped with lights mounted on the tips of its rotor blades. The "Rotor Tip Light Study," as the project is officially named, is being conducted by Kaman Aircraft under a contract with the Navy's Bureau of Aeronautics. The “tip lights” consist of small electric light bulbs housed in transparent plastic covers at the end of each rotor blade. In flight the rapidly revolving blades cause the lights to appear as a large circle giving rise to the “Flying Saucer” rumors.

Purpose of the project is to determine the feasibility of lights mounted on the tips of helicopter rotor blades (1) as an aid to other aircraft during night flights and (2) as an aid in night formation flying of helicopters. In case (1) it is pointed out that the flight characteristics of a helicopter brought about by- its ability to slow down suddenly, to stand still in mid-air, to fly backward or sideward as well as forward, and to rise and descend vertically, make it necessary for helicopters to carry a distinguishing mark for easy identification by pilots of other types of aircraft which do not have the maneuverability characteristics of the helicopter. For this purpose a bright white light which is visible over a long distance as a bright circle readily identifies the aircraft as a helicopter. Thus pilots of other types of aircraft cannot mistake the helicopter for a fixed-wing airplane which they might assume to be flying at a speed similar to their own, an assumption which could result in an accident. In case (2) the use of rotor tip lights will assist pilots flying helicopters in formation at night to determine the, exact location of the rotors of all ships in the formation, thereby precluding the possibility of flying closely enough to cause an accident. In this respect two types of rotor tip lights are being tested. One uses blue bulbs which result in a continuous circle of blue light. The second type uses red and green bulbs which produce a circle which is green on the starboard (right) side and red on the port (left) side. The latter method makes any change in the helicopter's flight path readily discernible to the pilots of accompanying helicopters. The red and green circle is accomplished by automatically timing the switching "on" and "off" of the red and green bulbs to the turning of the rotor itself. 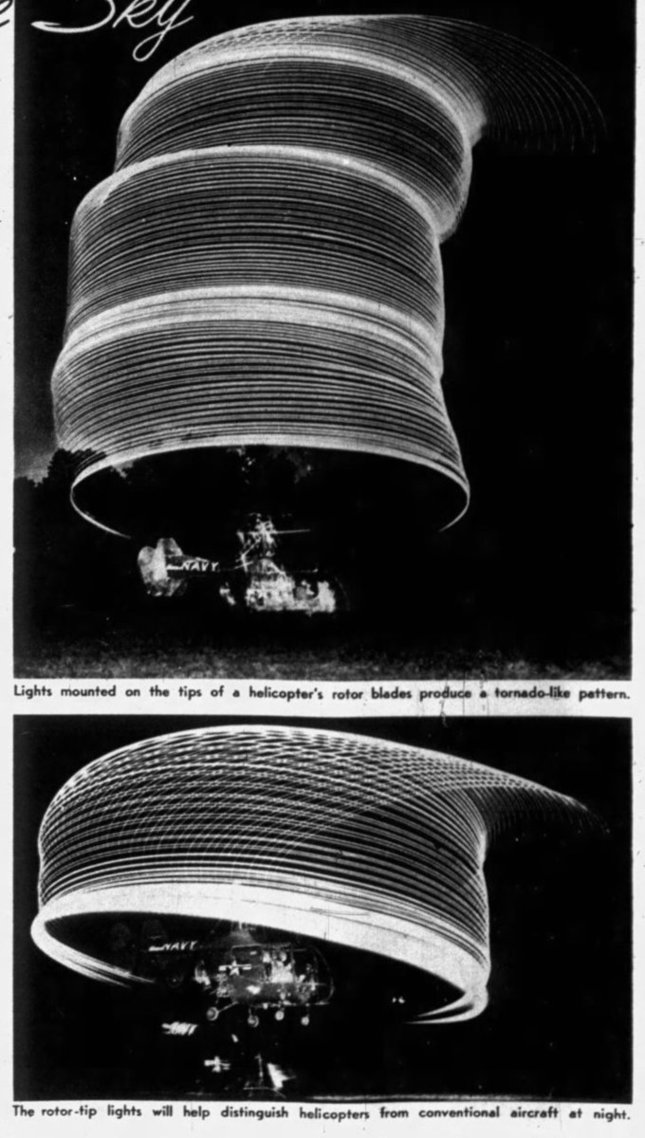 Another article appeared in the military magazine, Army Aviation Digest Oct. 1955, probably near the conclusion of the study.

This particular project merely produced a lighting effect that was mistaken for flying saucers. Far more interesting are the aviation projects that attempted to duplicate the appearance or performance reported in sightings of flying saucers.
By Curt Collins - May 24, 2019 No comments: Links to this post

The 1950 UFO Landing at Amarillo, Texas 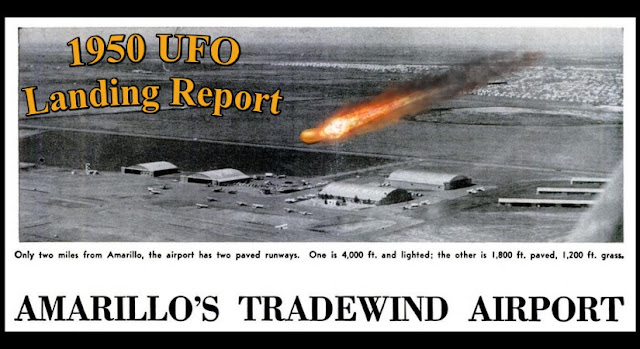 A nationally syndicated news story by United Press reported on May 13, 1950 that a flying saucer had landed at a Texas airport, The witness was B. G. Hunter (probably Bobby Gene Hunter), age 21, the night service man for Tradewind Airport, which at the time was about a 640-acre airfield. While it was a single-witness case, there was trace evidence from the landing.

The story appeared in papers under various titles:

The Victoria Advocate, May 14, 1950
"Saucer Lands at Airport, Burns Grass"

The Associated Press also ran a version of the story with several additional details including a direct quote from the witness describing the shape of the UFO. 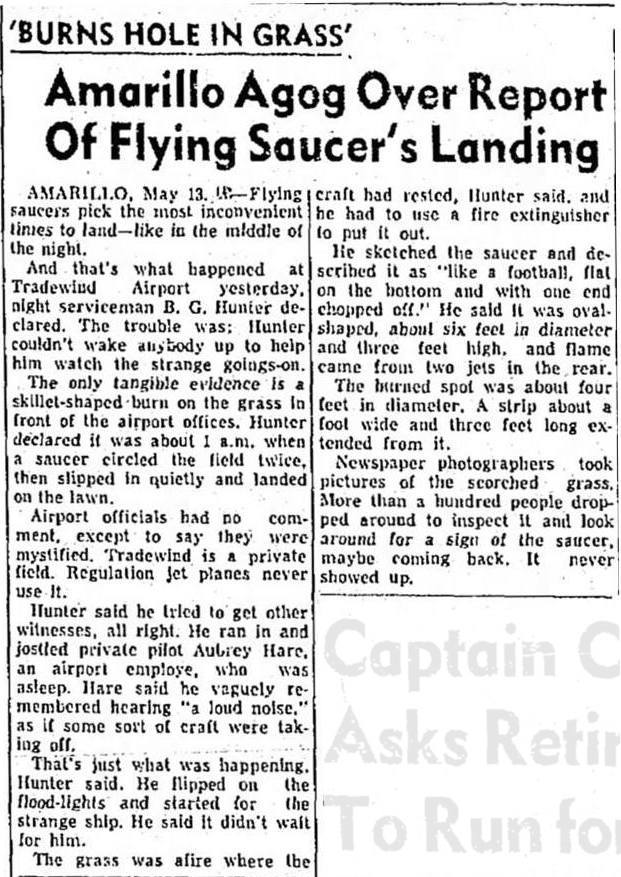 In Loren Gross’ UFOs: A History, Volume 6: April- July 1950, he introduces the Air Force’s Office of Special Investigations report collected from the witness:

The District Commander of the 11th OSI unit stationed at Tinker Air Force Base, Oklahoma, immediately ordered agents to Amarillo, Texas to question the night serviceman at the Tradewinds Airport. It took something special to lure OSI investigators all the way to Amarillo but in this case the trip seemed worth the trouble.

Gross quotes the OSI report, which redacts the name of B. G. Hunter and the sleeping pilots:

I glanced aloft, and saw what appeared to be an exhaust flame approaching from the West-Southwest. I watched the approach of the flame until it passed overhead, and judged it's altitude to have been approximately 500 to 700 feet . I was mainly interested in it because it did not have any navigation lights and until then supposed it to be a plane.

I again went inside the hangar to try and awaken --- (deleted), but being unable to do so, returned to the front of the hangar. The object remained on the ground for a period of three to five minutes, and after returning to the front of the hangar, I noticed the grass beneath the object beginning to smolder and burn. While watching the object, it suddenly raised, a whining sound was heard, accompanied by white flames, approximately three feet in length, shooting from the rear. After reaching a level of four feet, it then took off in a Southeasterly direction, with a terrific roar. The take-off was gradual, and it started off in a shallow climb until reaching the far side of the field, when it started a steep climb. It then leveled off, and seemed to turn, but without the bank of a conventional aircraft. It appeared to remain on an even keel while making the turn, and then proceeded to gain speed and momentum; headed in a Westerly direction, and with a sudden burst of speed was soon lost to sight.

I would estimate the size of the object to be approximately six to eight feet in length; from one and one-half to three feet tall at the highest point.

After taking off I noticed the grass where the object had been sitting was still burning. I took a fire extinguisher from the hangar, and used almost all of the contents in putting out the fire.


What the OSI document fails to disclose is the extent of the examination, if the burned grass from the landing spot was tested, there’s no record of it. All we have is the testimony of Hunter, the lone witness.

A few years later, the excitement of the Levelland, Texas, sightings prompted a review of earlier cases in the Amarillo News-Globe, Nov. 10, 1957. B. G. Hunter told his story once again with a few additional details.

Hunter's sighting remains just as mysterious today. While the UFO doesn't sound particularly unearthly, the object described would have been too small to hold a human pilot. At the time, unmanned aircraft development was in its infancy; a remotely controlled jet landing and take off at night as described, is to say the least, improbable. The landing spot of the UFO may offer a clue, though. It was close to the airport offices where it could be seen. That would seem to indicate that the intelligence behind it was attempting to put on a show.
By Curt Collins - May 10, 2019 1 comment: Links to this post