Houdini on the Meaning of Flying Saucers

A warning from beyond the grave about UFOs. 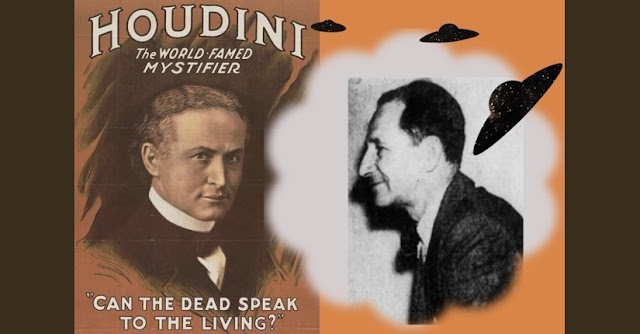 Joseph Dunninger had been waiting for decades for a message from his departed friend, magician Harry Houdini.

Psychic Henry C. Roberts was making a name for himself as an expert on Nostradamus and his prophecies. This time, Roberts had a message for the world from another source, and he urged Dunninger broadcast it to the the world. He had been contacted by the spirit of Houdini, who told him that the flying saucers were a warning for mankind.
Houdini, like the aliens Xeglon, Klaatu and Orthon, carried a message for the Earth:

Stop your wars and atomic bombs or be destroyed.


That story seems to have been about the extent of Henry C. Roberts' involvement with UFOs - and Houdini's. Joshua Blu Buhs' blog, From an Oblique Angle, has more on the saga of Roberts' life, see: Henry C. Roberts as a Fortean 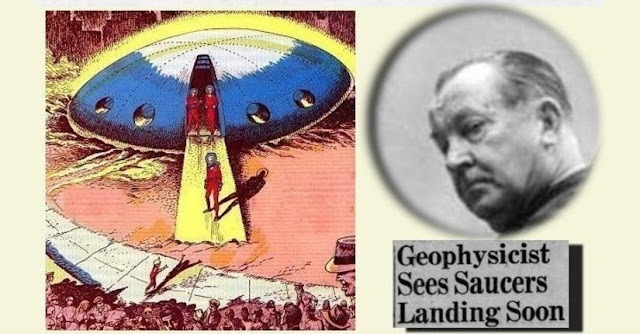 In 1950, the public had been told that flying saucers are real, but there was even more exciting news circulating. A scientist disclosed that four spaceships had been captured by the US government - and we should expect another flying saucer landing soon. The story was issued by United Press (UP) and published as front page news by many papers across the USA on October 20, 1950.


The "scientist" was oil man Silas M. Newton, billed in the news as a geophysicist. Newton's story was the basis for the best-selling book by Frank Scully, Behind the Flying Saucers.
The Newton story began circulating in late 1949, and spread faster than a virus, and by early 1950, several variations of it were in circulation.


... the story got from Silas Newton to J. Edgar Hoover: Newton told George Koehler (employed at radio station KMYR in Denver), who told Morley Davies, who told Ford dealers Murphy and van Horn, who told auto dealer Fick, who told the editor of the Kansas City Wyandotte Echo. By that time, Koehler had become "Coulter," just like a game of "gossip" (or a game of "pi")!

This article was picked up in the news, where it caught the interest of the OSI. The OSI agent passed the story on to Guy Hottel of the FBI, and he gave the 8th-hand story to Hoover. http://www.nmsr.org/aztec.htm 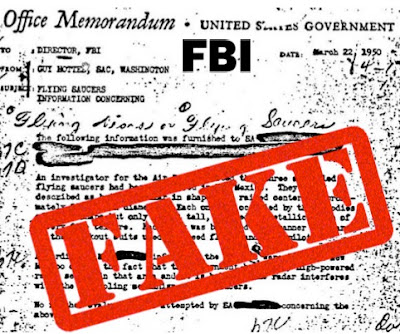 A version of Silas Newton's story was recorded by agent Guy Hottel of the FBI New Orleans office on March 31, 1950. It's a real document, but it has often been misrepresented, taken out of context. Since it surfaced in the 1970s, the "Hottel Memo" has been frequently cited as evidence of a government cover-up of recovered UFOs, and also falsely linked to another incident, the alleged flying saucer crash known as the "Roswell Incident." The document itself can be viewed at the FBI Vault:
https://vault.fbi.gov/silas-newton/silas-newton-part-06-of-06/view#document/p2

In 2011, Isaac Koi made a thorough examination of the frequent "re-discoveries" of the Guy Hottel Memo: "Debunked! The FBI alien bodies memo – A case study in the reinvention of the wheel"

The story was a hoax, part of a scam by Newton to provide an exotic technological origin for the "doodlebug" he was selling with partner Leo GeBauer, a device that was supposed to magnetically detect oil deposits beneath the earth. He was tried and found guilty of fraud in 1953.

Here's a short version of the Silas Newton Aztec hoax, a non-UFO article examining the episode as just as an oil swindle. It's from the site of the The American Oil & Gas Historical Society:
Doodlebugs, Magnetic Loggers & Flying Saucers

The Gift that Keeps on Giving

Although the hoax had its critics, it took two years before it was debunked by J.P. Cahn in "The Flying Saucers and the Mysterious Little Men" in True Magazine, Sept. 1952. Newton and Scully exploited the hopes and fears of those interested in the UFO mystery, promoting the belief that extraterrestrials were visiting Earth and that there was a Government conspiracy to hide it. When the hoax was exposed, the story was largely forgotten, but the alien and cover-up concepts were adopted as canonical beliefs. The Air Force was portrayed as a villain in Newton's story and Scully's book, and it continued to be a source of irritation. In 1965, answering a request for information about it, the Air Force replied:

The Shape of Things to Come

As for Silas Newton's 1950 prediction that a flying saucer would soon land, he was off. It happened in 1952, according to the story told by George Adamski.