The 1958 Biggleswade UFO: A Contribution to Science 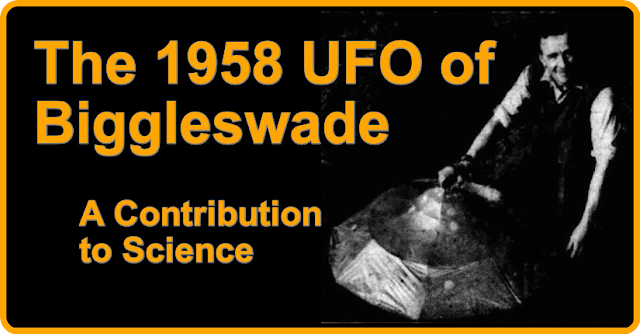 Frank Arthur Russell worked in manufacturing for an engineering firm at Biggleswade, Bedfordshire, England. However, his fame came from the craft built in his back yard as a hobby. In the 1930s he made news was for making various things, from a model glider, a canoe to a houseboat. In the 1940s he built a one-man submarine to search for Atlantis.

In 1958 Frank Russell was in the news for having built a flying saucer. Russell began flying the saucer around the end of 1957. The flying saucer itself was small, made of aluminum foil stretched across a 4-foot wire frame. The otherworldly performance of the UFO was due to an elaborate series of illusions produced by stage magic techniques. The “rotation” of the craft was produced by lights on the end of a rod circling from a small battery-powered motor. Russell flew the saucer only on dark nights, in order to conceal the nylon line and surplus meteorological balloon from which it was suspended.

The saucer's performance was driven by a timer, which after four and a half minutes of spectacle would kill the lights, then launch a fireworks rocket. That produced the illusion that the saucer had shot off into space at great speed. Under cover of darkness, he’d reel the contraption in and hide it until the next flight. As Russell himself said, “it really looked very effective.” For six months the saucer flew and the town and investigators were persuaded that they were seeing something extraordinary - perhaps from another world.

Amateur UFO investigator John Whitworth had been tracking the saucer for months, but hearing that Russell made high-flying kites, he became suspicious. When accused, Russell confessed and grounded the saucer. The Daily Mail quoted Russell as saying, “I did this partly as a joke and partly as a contribution to science, to show how easily people could be hoaxed.”


Russell’s confession originally only named himself as the hoaxer, but he later admitted he had two accomplices, Jim Bates, and “Peter.” According to the story in The Daily News, January 4, 1959, “It’s Still a Gullible World” by Tom Allen, “Biggleswade officials were looking around for ideas to attract tourists. Russell put his idea to two friends, Jim Bates, 40, a member of the town council, and another man who still insists upon anonymity.” Allen wrote the town’s reaction to the faux spaceship, saying, “Scores of eyewitnesses saw the saucer. Space-age home guard patrols were established to be ready in case the Martians dropped in to visit.”

The Daily News story revealed that another hoax was in the works, “Russell himself is unrepentant. Winking roguishly, he recently confided, “I have something else up my sleeve. But I’m not telling what it is.”
Frank Russell passed away in 1991, but Bedfordshire rediscovered his exploits in 2018 and placed a monument there to remember him. The Project F.A.R. aerial balloon was also launched in his honor.

Russell’s story was the subject of a nationally syndicated 1958 editorial article, published in some papers as, “And a Woman Spoiled His Fun”:
https://news.google.com/newspapers?nid=1842&dat=19580606&id=oBYsAAAAIBAJ&sjid=ecgEAAAAIBAJ&pg=689,665309&hl=en

The U.S. Air Force took notice of the Frank Russell case. While Project Blue Book did not have a proper file on the events, there is one document relating to the news coverage of it. The handwritten comment at the bottom of the document says,  “Very, very funny!” and is followed by remarks indicating the hoax had been responsible for 10 UFO sighting reports.
https://www.fold3.com/image/8846102