The Future of Ufology: A Plea and a Warning

We proudly present a timeless editorial about the quest for a scientific study of unidentified aerial phenomena. 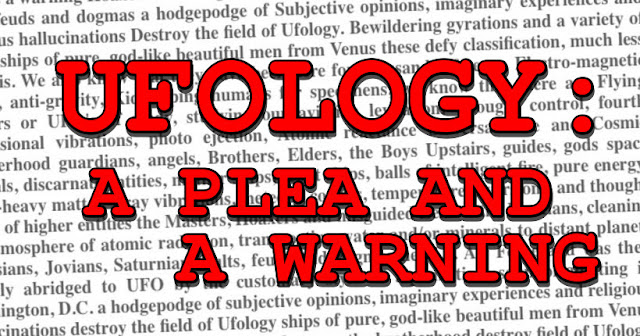 Ufology is the study of flying saucers, or Unidentified Flying Objects. This term was first applied to the saucers by the U.S. Air Force and was then quickly abridged to UFO by the customary style of alphabetical soup originating in Washington, D.C. To most of the students of Ufology the subject long remained only a listing of sightings with a minimum of analysis. Then it began to be contaminated by the antics of hoaxers and misguided zealots. Finally it has degenerated, in many instances, into a hodgepodge of subjective opinions, imaginary experiences and religious hallucinations which are not only unverifiable but often ludicrous.

The general public is totally unaware of the real scope of Ufology. Even the full-time devotees seldom sense that the study of flying saucers, if pursued to any logical level or conclusion, soon turns out to be a study of life. It parallels the study of mankind in past, present and future--in science, religion and philosophy. The subject of Ufology is as broad, as deep and as long (especially in terms of time ) as the study of humanity itself. Also, it is just as little understood, either in substance, concept or application.

To boil it all down; we know that there are Flying Saucers or UFO's --and that's about all we do know about them with any degree of certainty. To be sure, we know there are many types and that they come and go with bewildering gyrations and a variety of colors, but these defy classification, much less analysis. We also know that they have been here for thousands of years, which makes it difficult for the Russians or our own Air Force to claim parenthood for them. We know that the y are prominent in Biblical history, as instanced by the wheel of Ezekiel.

We believe that they are intelligently controlled either by pilots, or that they are actually intelligent entities of a nature completely beyond our ken. But-- we don't know. We don't know where they originate. We don't know their purpose, or whether they have any purpose. But, whatever may be the deplorable state of our knowledge of UFO's, we certainly know some thing about the state of ufology--and how!

This embryonic science is as full of cults, feuds and dogmas as a dog is of fleas. There are probably more opinions about the nature and purpose of UFO'e as there are Ufologers. The sky visitors are believed to come from Russia, the U.S. Air Force, open space, the moon, Venus, Mare Jupiter, Saturn, Alpha Centauri, the outer Galaxy, distant galaxies millions of light years away, from the fourth dimension, from etheric space (whatever that may be), from the fifth dimension, from the second, third fourth, fifth, sixth, seventh or other spheres of intelligence and existence, from etheric planets, an invisible planet behind the moon, the spirit world, and perhaps even from a galactic Shangri-La!

UFO's are believed to have the purpose of exploring the earth (the job should be nearly complete after at least ten thousand years), mapping the earth, studying humanity, cleaning the atmosphere of atomic radiation, transporting water and/or minerals to distant planets, kidnapping humans for specimens of study, studying our aviation and rockets, gathering to evacuate this planet at the onset of a new cosmic catastrophe, preparing for the second coming of Christ, aiding in our physical and mental evolution, also giving us religious guidance in matters relating to universal love and cosmic brotherhood.

They are said to be representatives of God, the gods, an elder race, Christ, et alia. We are in communication with UFO s by infra-red light beams, electronically modulated and detected, by radio, flashlight, direct voice, cabalistic footprints, telepathy, spiritual mediumship, revelations of esoteric and occult masters, and by flickering electric lights.

They are guardians, angels, Brothers, Elders, the Boys Upstairs, guides, gods, and representatives of an indeterminate number of super-circumbient spheres of intelligence.

They are vicious, kindly, vengeful, benevolent, destructive, protective, god-like, animal-like, humanoid, non-human, pygmies, giants, religious, pagan and what have you. They land, they don't land. They contact a few obscure characters. They don't contact anyone. They have been here thousands of years. They were not here before 1947.

If you are skeptical about their existence and antics, you are likely to be called a lot of dirty names, the least of which is asinine or anti-social. If you accept the stories of contacts and rides in UFO's you are a crackpot (now termed Psycho-Ceramic). If you are undecided you are a worm or a weak sister. Anyway you put it, you can't win.

The extremes of beliefs are, on the one hand, that they are man-made, and on the other that they are ships of pure, god-like beautiful men from Venus with all of the combined Divine characteristics of the Deity, the Masters and a host of angels. We are told in this view, that they will soon land for the purpose of saving us from ourselves, or at least they will transport the Biblical 144,000 chosen ones, the elect, to a safer and saner place of abode. Dedicated people dress in white and stand on street corners awaiting the arrival of the brothers! And so it goes.

NOW -- if we are not now to destroy the field of Ufology and let it go down in a welter of ridicule, we have got to work together, work with facts and not rumors, do something drastic about deep-enders and hoaxers, and be as objective as possible. The whole field is on the verge of extinction right now because of irresponsible hoaxing and self-aggrandizement. That is a warning. Every day sees the demise of better and sounder clubs and magazines. The plea is: tolerance for the viewpoints of others until they are proven wrong, and refraining from positive statements until we are proven right. Otherwise--it is goodbye to Ufology in a very short time.
_______________________________________________

"The words of wise men are heard in quiet more than the cry of him that ruleth among fools."
--Ecclesiastes, 9:17.

M. K. Jessup’s “Ufology: A Plea and a Warning” originally appeared in Miami Saucerlore, Spring 1958, published by the Miami Flying Saucer Club, and was reprinted in Max B. Miller’s SAUCERS, Spring & Summer 1959 issue.

Joshua B. Buhs wrote an excellent article on Jessup’s life and work, and took a look at his unconventional outlook:
“The Case for the UFOs” is principally a Fortean book... The basic story that Jessup tells in this book is a mixture of Theosophy and Fortean ideas. He argues that flying saucers do not come from deep space, or even other planets—the distances are just too vast; rather, they originate in the area between the moon and the earth...”
See “Morris Ketchum Jessup as a Fortean” for more information.