The Engineer Who Saw a Flying Saucer... Lecture 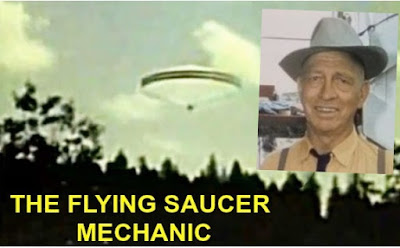 Today, it's hard to find a good UFO story in the news, but in the 1950s, almost any flying saucer tale was worth printing, even if it was only second-hand. The Syracuse Herald-Journal from Syracuse, New York, in their June 15, 1954 issue reported that one of their ex-citizens, Thomas Mercurio saw a flying saucer lecture. The speaker was a "mechanic, whose name he did not recall." Mercurio heard the incredible tale of the man's ride in a flying saucer, his meeting the occupants, and the first close encounter with a female spaceship captain. But the man's name? That, he forgot.

A bit short on the journalistic basics of "Who, What, When, Where, Why, and How," but a fascinating report:

The investigative team here at The Saucers That Time Forgot has been able to identify Mr. Mercurio's mystery mechanic as experiencer Truman Bethurum, the author of Aboard A Flying Saucer, and the female spaceship commander as the lovely Aura Rhanes. 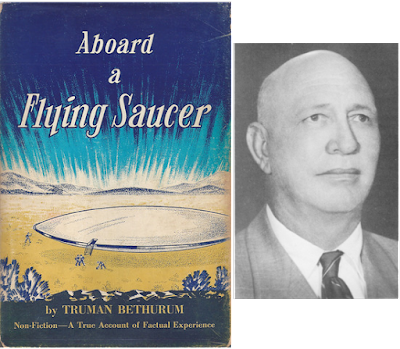 From "Saucer story flew for a time," by Josh Grossberg from the Daily Breeze:

Truman Bethurum from Redondo Beach captivated crowds in the 1950s with his tales of riding in a spaceship and its exotic occupants... And its captain, Aura Rhanes, promised to take Bethurum to visit Clarion in the near future...

Capt. Rhanes was a beautiful woman who had a "slender Latin-type face" and wore a radiant red skirt, black velvet short sleeve blouse and a black beret with red trim...

Coming at a time when flying saucer mania was riding high, Bethurum's tale of olive-skinned, black-haired aliens, quickly captured the nation's attention. He enthralled a capacity (and paying) audience at the aptly named Neptunian Club in Manhattan Beach and, within a few years, was on the lecture circuit, entertaining enthusiasts with tales of intergalactic visitors. He spoke to Lions Clubs, and appeared on radio and television programs. He was especially popular with the Unidentified Flying Object Club of Sacramento and visited them several times. And in 1954, he wrote a book, Aboard a Flying Saucer. Even today, his allure continues to resonate...

A 1954 newspaper advertising one of Bethurum's many lectures promoting his saucer story:

Truman Bethurum died in 1969, but fortunately, fragments of his lectures has been preserved for the ages. He, Like George Adamski told of how the aliens wanted to bring peace to our planet. From the Long Beach Independent, September 28, 1954:

Scientists the United States are now prying into the secret of flying saucer power – “some kind of anti-magnetic or antigravity force “– but will not be able to gain this knowledge "until we all lose our desire to fight with each other," “Bethurum said.

"As soon as the fighting is over between us and the Rooshians and the Arabs and the Egyptians and everybody else we will have the secrets."

Thomas Mercurio may not have remembered Truman Bethurum's name, but the sensational saucer story he heard from him was unforgettable. 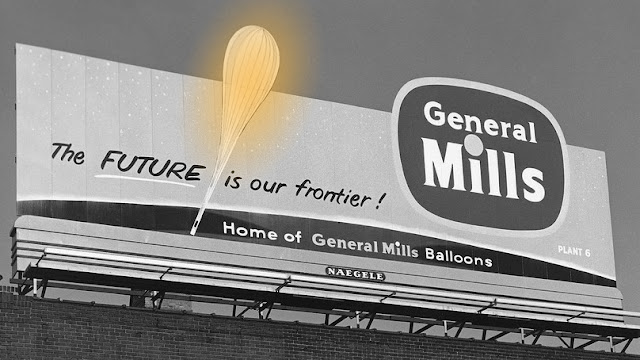 There is no doubt that many balloons of all sorts contributed to reports of flying saucers. General Mills was launching scientific experiments since 1947, but weather balloons had been aloft in the skies since the 1890s. There were also balloons being flown by the US government of of a more secret sort. Before spy planes and satellites took over the job, balloons were used by military intelligence to collect data on our enemies, and even as a means to distribute propaganda leaflets.
Some of these balloon flights, covert or otherwise were reported by witnesses as unidentified flying objects.

The Times News (Idaho) ran a story on April 20, 1950:
Wyoming Ranch Hand Discovers- "Saucer" Unreal
Other papers used headlines for the same story such as: "Western Flying Disc Turns Out To Be A Balloon" and "Cowpuncher Finds 'Flying Saucer' Just Navy Balloon"

DOUGLAS. Wyo.. April 30 (UP)— A Wyoming cowpuncher thought he had latched onto a real flying saucer but learned the object was merely a balloon for measuring cosmic rays. Ranch Hand Everett Fletcher sighted the object In the sky 32 miles north of here and followed it to the ground. "It scared me," he said. "I thought it was an honest-Injun saucer.” Stamped on a nameplate was 'This scientific apparatus is the joint property of the US. Navy and the University of Minnesota.” A telephone call to Minneapolis  identified the ball as a  navy instrument apparently used for measuring cosmic rays."Don't open it," a navy officer warned. "Don't fool with the thing. Ship it here Immediately." The air force and other defense agencies have said repeatedly their investigations have found no evidence on the existence of so-called “flying saucers.” 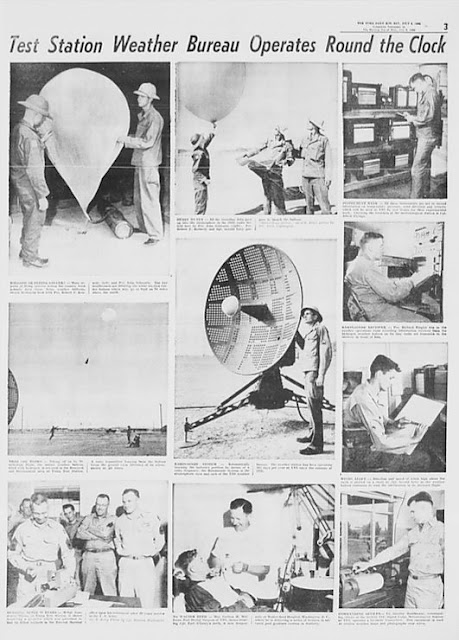 The Yuma Sun July 3, 1954 carried a feature, "Test Weather Station Bureau Operates Around the Clock." As an aside, it mentioned that the Army  balloon launches were sometimes mistaken for flying saucers. 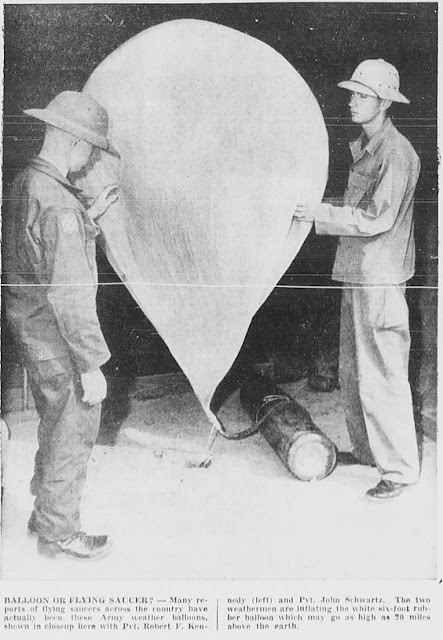 BALLOON OR FLYING SAUCER? — Many re­ports of flying saucers across the country have actually been these Army weather balloons, shown in closeup here with Pvt. Robert F. Kennedy (left) and Lt. John Schwartz. The two weathermen are inflating; the white six-foot rub­ber balloon which may go as high as 20 miles above the earth. 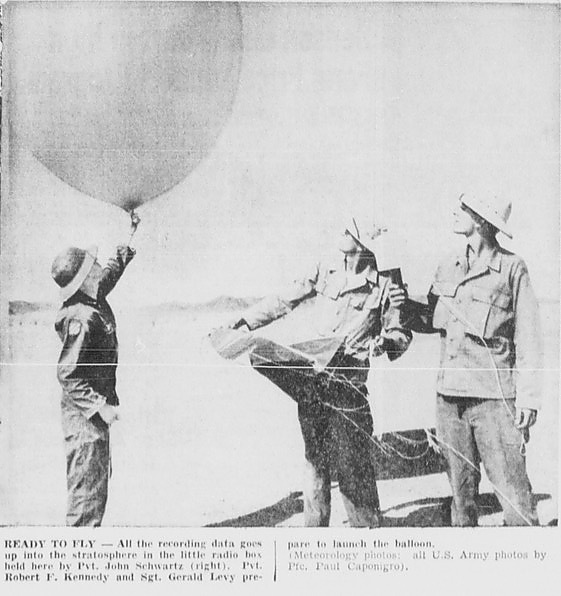 READY TO FLY — All the  recording data goes up into the stratosphere in the little radio boxheld here by Pvt. John Schwartz (right). Pvt. Robert F. Kennedy and Sgt. Gerald Levy pre­pare to launch the balloon. (Meteorology photos: all U.S. Army photos by Pfc. Paul Caponigro).

Note: No, this was a different Robert F. Kennedy, not the politician, but the Army photographer Paul Caponigro became famous, when he turned to other subjects after leaving the service, and has made a success of it. https://pointlight.com.au/artists/paul-caponigro 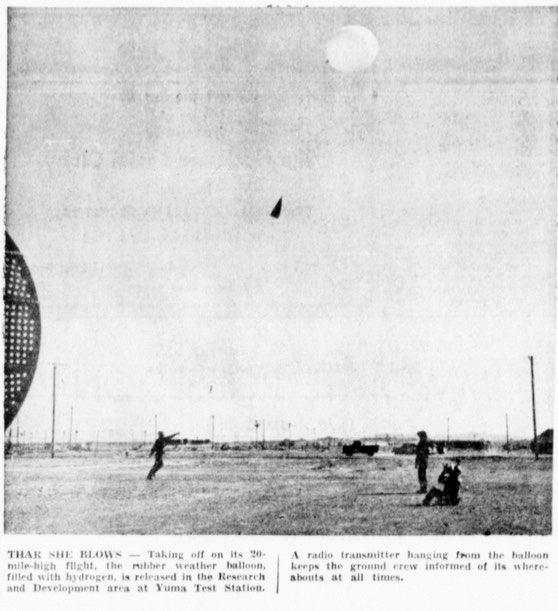 THAR SHE BLOWS — Taking off on its 20-mile-high flight, the rubber weather balloon, filled with hydrogen, is released in the Research and Development area at Yuma Test Station. A radio transmitter hanging from the balloon keeps the ground crew informed of its where­abouts at all times.

Lowell Massachusetts had a population of 95,000 in 1954, and about 275 of their citizens made phone calls to the newspaper one August night to report an unidentified flying object.
A voice of authority always helps to calm things down. Harry A. Bullis, General Mills' chairman of the board, was quoted to explain the strange things seen in the skies.

As aerospace technology advanced,  the dependence on balloons for scientific experiments  diminished. Likewise, satellites and planes eventually eliminated the need for so many spy balloons.
What happened to those who had so dutifully worked to construct these magnificent balloons? Some must have been assigned to other duties, but undoubtedly some were out of a job.
. . .

For further reading on balloons as UFOs, and the associated controversy, see:
Exotic Balloons and the UFO Phenomenon – An Intertwined Puzzle by Joel Carpenter.