Captured Flying Saucers: July 7, 1947, The Disk that Slipped by the FBI

The FBI is shut out 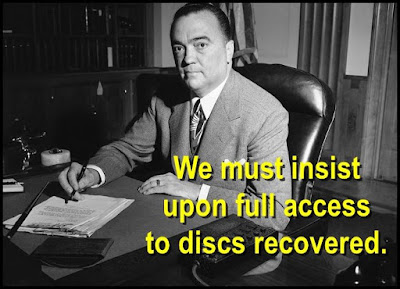 The FBI memo with the handwritten note by J. Edgar Hoover:

Some UFO proponents like James Fox have insisted the memo is connected to the recovery of a crashed alien space craft. A few have misinterpreted Hoover's handwriting of La. as SW for South West, thinking that his memo was about Roswell, NM. Others have speculated that it was LA for Los Angeles, CA. However, the facts is that La. was short for Louisiana, as in the case of the July 7, 1947 crashed disk case in Shreveport, Louisiana.


There have been many crashed flying saucers recovered over the years, but this is one of the very few instances where the object's flight and actual crash were witnessed

From the files of Project Blue Book:


"Mr. (F. G. Harston), Shreveport, Louisiana, stated in an interview on 7 July 1947 that at 1805, 7 July 1947, he heard the disc whirling through the air and had looked up in time to see it when it was approximately 200 feet in the air and coming over a sign board adjacent to the used car lot where he was standing. ( Harston) stated that smoke and fire were coming from The disc and that it was traveling at a high rate of speed and that it fell into the street and his immediate vicinity. ( Harston) further stated that he retrieved the disc from the street and immediately notified Army officials at Barksdale Field."

Investigation showed that this disk was yet another made here on Earth:

"A flying disk' fell in the street in a Southern city.  It was composed of aluminum strips, fluorescent-lamp starters, condensers, rivets, screws and copper wire.  A little investigation resulted in a confession from the culprit, the superintendent of an electric-fan factory, who said he concocted the device and threw it from the roof of the factory, hoping to scare his boss, who was getting into his car."

What You Can Believe About Flying Saucers - Conclusion by Sidney Shalett, Saturday Evening Post  May 7,  1949

The object was determined to be of Earthly origin, and the identity of the hoaxer was determined, so this in one of the rare cases closed as definitively solved.