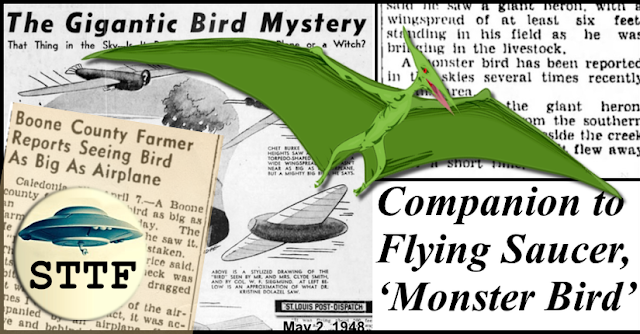 Flap entered the UFO lexicon due to Captain Ed Ruppelt’s use of the term in The Report on Unidentified Flying Objects: “In Air Force terminology a ‘flap’ is a condition, or situation, or state of being of a group of people characterized by an advanced degree of confusion that has not quite yet reached panic proportions.” The term got repeated by UFO buffs, and flap took on a different meaning, more about a heightened period of UFO activity, not the commotion it caused.

In late 1947 and early 1948, things were so slow that there was no flap of any kind. James Thrasher’s Feb. 11, 1948, syndicated editorial column noted “a slump in the grain market,” but also in the UFO business: “...like the New York Stock Exchange, we've been a little nervous lately. And all we can say is we hope those flying saucers don't put in another appearance — at least till we're feeling better.”

As we know, the saucer business was far from finished, but the next UFO event to make national news was something else. A series of 1948 UFO incidents in Illinois received national news coverage and can be considered the second flap of the flying saucer era. It caught the attention of the Air Force’s UFO investigation, chiefly due to one of the key witnesses being a high-ranking experienced trained observer. Colonel Walter F. Siegmund (1887 - 1964) was 61 years old at time of the sighting, the retired commandant of "Camp Kearns," Army Air Forces Base, Kearns, Utah.

On Tuesday April 6, 1948, Robert Price of Caledonia, Illinois, reported seeing “a bird as big as an airplane.” 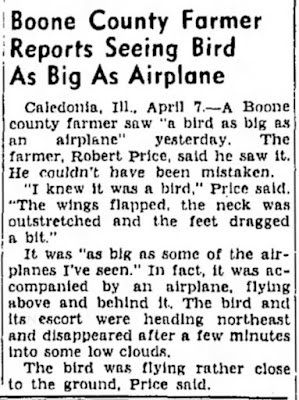 Seeing the story prompted another witness to come forward, Veryl Babb, a truck driver, who thought it looked like a pterodactyl. More incredibly, the witnesses “believed it might be a visitor from another planet.” 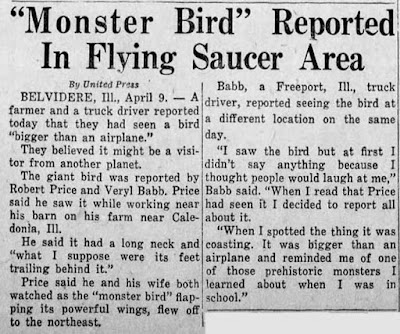 Once the report was out, others came forward saying they had seen the same thing even earlier before, but hadn’t spoken about it at the time. There was James Trares, a 12-year-old boy, who said he’d seen a plane-sized bird about three months before. The other witness, Col. Walter F. Siegmund, said he had seen it on Sunday, the 4th, several days before the other witnesses, but at the opposite end of the state.

Col. Siegmund said he didn't see any flapping of wings but he was sure it was a huge fowl and not a type of aircraft. "At first I thought there was something wrong with my eyesight," Siegmund said. "But it was definitely a bird, and not a glider or jet plane...But from movements of the object and its size, I figured it could only be a bird of tremendous size." 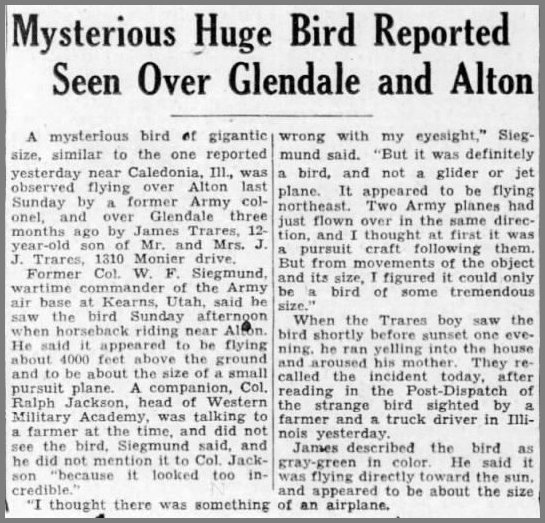 Belvidere Daily Republican, Belvidere, Illinois, April 15, 1948
“Gesell Solves Bird Mystery -- Or Does He?”
"It was an airplane towing a glider," Gesell said. "I saw it myself.” 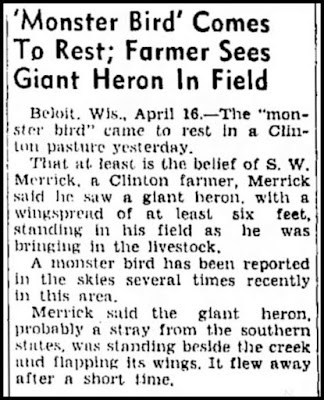 A United Press story published April 18, 1948, seemed to put the mater to rest, when another of the witnesses retracted the bird evaluation: “Saturday, Bill Gesell of Belvidere, another of those who saw it, put his foot down on the tale and said it definitely was an airplane-towed glider. Veryl Babb of Freeport, the truck driver, said he had to agree.” 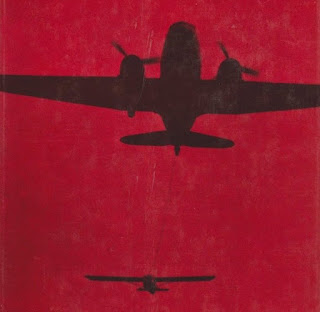 The sightings didn’t end, nor did many of the witnesses impressions that they were seeing a big bird. Col. Siegmund, on the other hand, had studied up and concluded it was not a paranormal anomaly:

The Ogden Standard-Examiner, Ogden, Utah, April 25, 1948, reported:
“‘Enormous’ Bird Is Sighted again, flapping Over City” (UP)
“Siegmund said he had been doing considerable research on birds since sighting the fowl and had concluded it was an albatross or condor that had wandered far from home. S. B. Heckler of the St. Louis Audubon society said it was probably a huge pelican.” 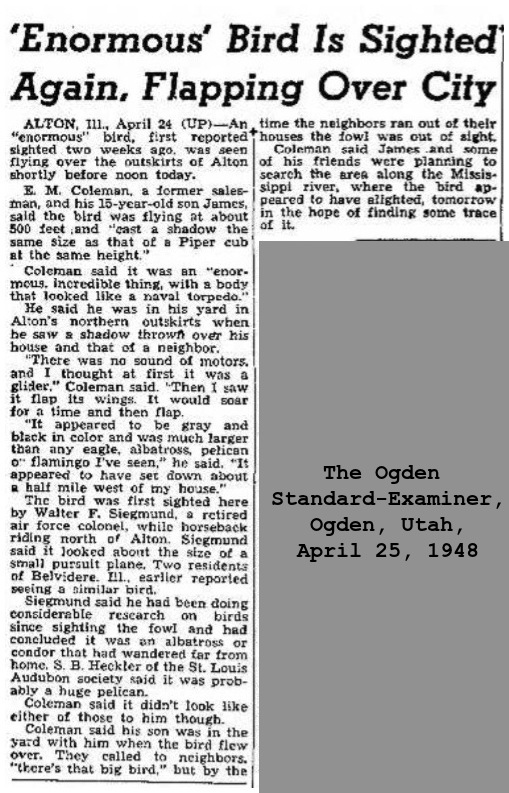 St. Louis Post-Dispatch, St. Louis, Missouri, April 26, 1948
“Flying What-Is-It Is Seen Chasing Plane Over City”
One witness account would seem (in part) to support the towed glider explanation:
Mrs. Kristine Dolezal, 2055 Russell boulevard, heard an airplane flying low over her home today. "When I looked up," she said, "I was amazed to see this big dark thing apparently chasing the plane. It was clumsy, and flapping its wings sort of lazily. The plane and the bird finally flew off in different directions."

Two St. Louis policemen had witnessed it together the previous Saturday night, and even they gave conflicting descriptions. Patrolman Francis Hennelly said:

"The thing was as big as a small airplane. Its wings were flapping, and it was headed southwest, flying at an altitude of several hundred feet. I thought it was a large eagle, but I've never seen one that big before."
Cpl. Clarence Johnson had a different description: "It looked like a witch flying across the sky," he asserted. "It wasn't Halloween, either."

The Altoona Mirror, Altoona, Pennsylvania, April 29, 1948
“Flying Monster in Missouri May Be Bird, Plane or Witch” (UP)
“Charles Hertenstein, ace trouble shooter for Mayor Aloys P. Kaufmann, planned his strategy today for capturing the night-flying “what’s-it” that has terrified residents recently. Kaufmann assigned Hertenstein the task of catching the giant bird —if it is a bird—yesterday. That was after he received letters from indignant taxpayers, denouncing the city for its lack of action.” 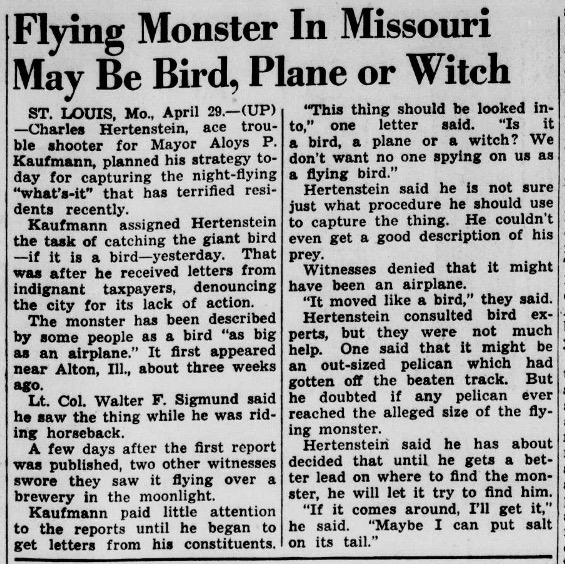 St. Louis Star-Times, St. Louis, Missouri, May 1, 1948 had an editorial piece on the mystery, “Wonderful Nonsense,” noting the conflicting descriptions:
“We have been through the flying saucer, submarines-off-the-coast and balls-of-fire stages recently, and right now St. Louis has a queer-bird mystery which it is enjoying immensely. This creature, which in many ways resembles the fabled filli-lulu bird (and may be one for all we know) has so far been positively identified as an enemy projectile, an eagle, a small plane, a condor, a magnetometer towed by aircraft, the last surviving member of the great auk family and a blue heron. Those who have seen it agree that it flaps its wings, doesn't flap it(s) wings, is very large, just a little bigger than a duck, flies quite high, stays near the earth, has feathers and is as naked as a billiard ball.”

St. Louis Post-Dispatch, St. Louis, Missouri, May 2, 1948, carried the story, “The Gigantic Bird Mystery” by Dickson Terry (illustrated by Amadee), and it summarized the case and the theories that had been advanced. It also had a bit of news about how even such a witness as Col. Walter F. Siegmund could be the subject of ridicule.
"Col. Siegmund is a well-known sportsman, in addition to being widely known in Army circles, and when a news service sent out a story about his having seen the thing, he began to get joking letters from friends all over the country, all asking the same question: What had he been drinking? Col. Siegmund has been looking up material on big birds and has come to the conclusion that what be saw was an albatross."

According to Loren Coleman in Mothman and Other Curious Encounters (2002), there were another few incidents, the last on May 5, then, “the sightings came to an abrupt end.” Not quite the end. There was at least one other report, one from about 200 miles away in Carrollton, Missouri:
1948 06 05 Mexico Ledger, Mexico, Missouri, June 5, 1948
“Did Monster Fly Over this Way?” 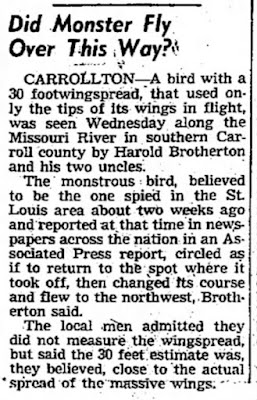 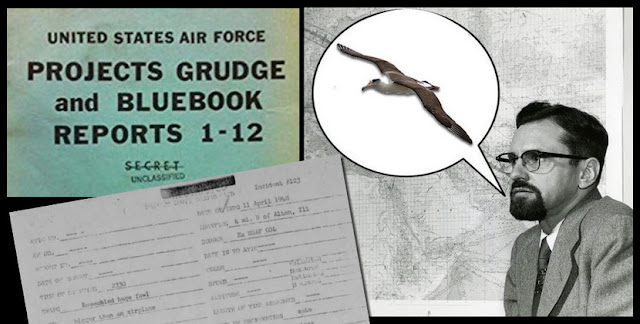 A version of the story appeared in the April 11 Dayton Daily News, where the Project Sign folks at Wright Field couldn’t miss it, especially since the headline featured the words “Flying Saucer.”

Project Blue Book files contain a 6-page report on the bird story, and the fact that Col. Siegmund was involved seems to been their primary concern.

Project Sign: Incident 123
"11 April 1948, 4 miles north of Alton, Illinois" Part of the file discusses the credibility of the report:

“Reliability: Impossible to evaluate.
Colonel [Siegmund] was never questioned but some sort of investigation obviously should be made in lieu of the fact that he was once commandant of Air Force Base [Kearns].”

Looking at the Air Force file, it’s interesting to see how incomplete the folder is. Many of the other cases feature large collections of newspaper articles, but this one does not, just a lone clipping, and there’s no indication that any investigation or interviews were conducted. During the Project Grudge days, a later review by Dr. J. Allen Hynek caused the sighting to be downgraded from "unidentified" to "bird."

This reflects unfavorably on the Air Force’s analysis of UFO cases. Apparently this evaluation was based on a single newspaper clipping, yet it became part of Blue Book’s statistics, carried as a “solved case,” without investigation.

The Witnesses to the Flap

The 1948 giant bird flap is better documented than most early UFO cases, but it’s largely been ignored, except by Forteans and cryptozoologists. What was left out of the Air Force file,  and from most accounts of the sightings as a “Thunderbird,” is that Col. Siegmund later changed his mind, downgrading his estimate of the object’s size, and that he concluded it was only an albatross or a condor. The cryptozoology coverage generally quotes only from the “monster bird” stories and ignores the testimony of those who reported seeing something mechanical, or ordinary large birds, or even a witch.

There’s no doubt the many witnesses were seeing something, but there is reasonable doubt about whether all of them were seeing the same thing. The case was marked by conflicting witness testimony, and we have to wonder if some of the later reports were “copycats,” or were due to “priming.” Whenever people saw something flying, some may have exaggerated what they saw out of the excitement of seeing it too, and of being part of something special. It’s happened with other things, from the mundane to the paranormal; from escaped panthers to UFOs. Having heard  of the flying monster, some people wanted and expected to see a giant bird.
. . .

Saturday Night Uforia ran a short piece on the story, “The Tale of the Belvidere Bird” https://www.saturdaynightuforia.com/html/articles/articlehtml/thebelviderebird.html

Saturday Night Uforia later covered more of the flap among the collection of articles, “In the News 1948.”
https://www.saturdaynightuforia.com/html/articles/articlehtml/itn48p6.html

For the sake of history, it’s worth remembering that a year before Kenneth Arnold made flying saucers famous, there was a notable sighting in 1946, of a bird-like UFO, as reported in the Saucers that Time Forgot article:
1946, Before Saucers, Kareeta: UFO Contact in California

The Giant Claw from 1957 was probably inspired more by Godzilla than the 1948 case, but the infamously bad film is noteworthy for at least one thing.; it’s technically a UFO movie. When the monster is initially sighted, it is investigated as a UFO, and it turns out to be extraterrestrial, but a giant bird! 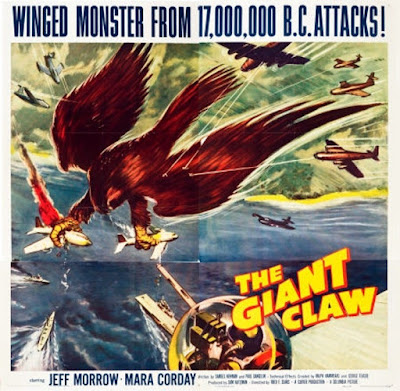