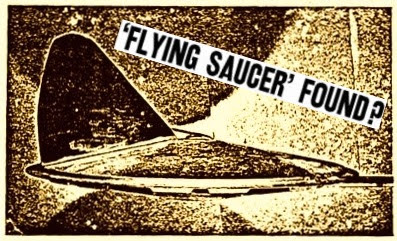 North Hollywood, Calif., July 10 - A saucer-shaped mechanical contraption, resembling a chicken-brooder top with a few gadgets added, was found in a geranium bed at the home of construction engineer Russell Long last night and the first official reaction was from Fire Battalion Chief
Wallace E. Newcombe, who looked at it skeptically, and said:
"It doesn't look to me like it could fly."
Long called the Van Nuys fire department and excitedly pointed to the metal saucer, 30 inches in diameter, which he said had been belching smoke from two exhaust pipes and emitting a blue-white glare.

The Federal Bureau of Investigation had a look at the device:

FBI file begins at page 60 of this PDF. 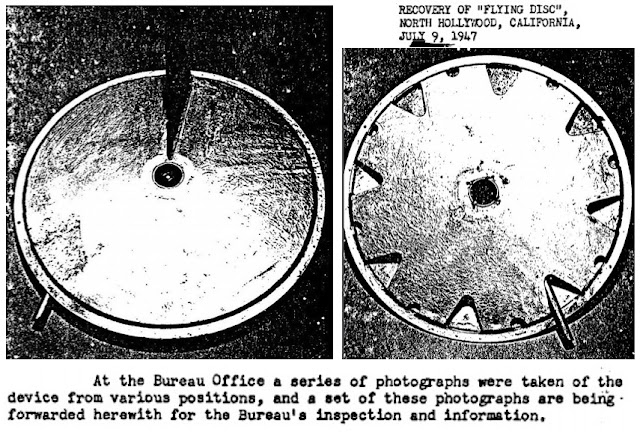 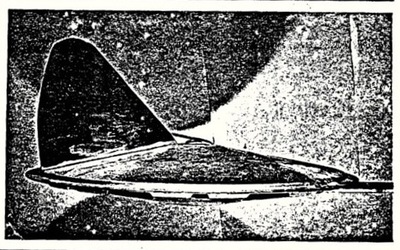 This news stories shows that Russell Long's discovery of a counterfeit disc was just one of many in the first few weeks of 1947's flying saucer fever.
"Among the many "hoax' saucers was this fraud found in a North Hollywood yard. It was made of galvanized iron, a radio tube, a piece of pipe."  Saturday Evening Post, May 7, 1949

The object was determined to be of Earthly origin, but the identity of the hoaxer was not determined, so in that regard, the case remains unsolved.

As with so many of the most interesting UFO cases featured here at The Saucers That Time Forgot, Project Blue Book has no file on this incident.