1947 marked the first election in the US where flying saucers played a role. It happened in Oregon, with a candidate exploiting the saucer mystery for an edge in a fierce campaign. Incredibly, it happened twice, in two different races in Oregon, the Coos Bay Pirates Regatta event in Marshfield, and at the Cottage Grove Lake Regatta in Cottage Grove. STTF’s political reporter, Claude Falkstrom, gathered the news clipping to recap the races, the election results, and in one case, the tragic collateral damage. 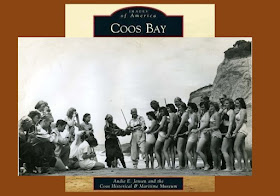 From Images of America: Coos Bay, by Andie E. Jensen, 2012:
“The Coos Bay Pirates were a civic group that promoted Coos Bay and North Bend. They were known for their colorful pirate costumes and high jinks in capturing civic members for a time of folly.” They sponsored an annual event, the Coos Bay Pirates Regatta.

The regatta promotion stated: “Thousands of persons will attend... a show worth seeing worth far more than the one dollar admission price... The Pirates produce this show on a non-profit basis to promote southwestern Oregon's interests.” There was a competition: “One of these lovely girls will... rule as queen of the Coos Bay Pirate regatta... Buy a regatta button and ask your Pirate Princess for instructions.” 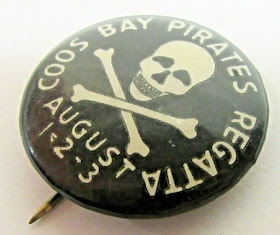 The $1 buttons served as tickets to the event, and contestants collected “votes” for queen of the regatta by selling them. Besides a crown and a queenly prize for the winner, there was also cash and merchandise prizes for the runner-ups. The campaign began in mid-June and ended on August 1, the start of the 3-day regatta event.

Here’s pictures of the candidates, the Pirate Princesses:

The press on the story told about the coronation, the celebrity guests, the orchestra and other activities that would be featured at the gala event.
Meanwhile, less than 400 miles away, a legend was born.
On June 26, the story broke about Kenneth Arnold seeing a formation of nine unidentified flying objects. As a result, flying saucer fever swept across the USA. As we shall see, it played a role in race for regatta royalty.

On June 28, Queen candidate Donna Christopherson was profiled in the newspaper.

By July 11, Donna Christopherson took the lead in the race for regatta Queen. The next day, she took flight to advertise her campaign and dropped hundreds silver discs from an airplane over Coos Bay, with the message, “Vote for Donna for Queen.”

The saucer stunt had been an attention getter, but by July 18, somehow Donna Christopherson slipped into second place. LuRae Ball took the lead, but then lost it to Fern Amos. The stories from The Coos Bay Times from July 25, 28, 29, 30 and 31 document the close and dramatic race.

On August 1st the final results were:

Another event took place about one hundred miles away the same time, the Cottage Grove Lake Regatta. The voting for their regatta queen ran from July 13 through 26, and the votes were tallied in ballot boxes in local businesses, “one vote for each dollar received.”
In the Cottage Grove contest, the candidate representing the Moose Lodge, Barbara Anderson, took the early lead. 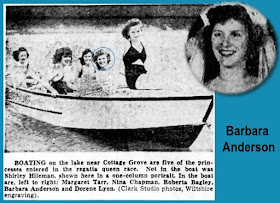 To win further votes, Barbara dropped saucers from a plane on Saturday July 19. 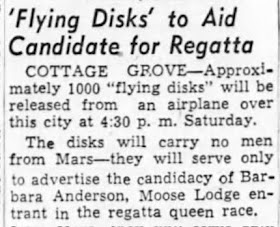 Unfortunately, the disk drop resulted in a serious injuries:
The accident did not seem to have an effect on the campaign, and closing in on the finish, Barbara held on to her lead in the race.
Despite her early lead, Barbara Anderson slipped and finished in second place as runner-up. Shirley Hileman was crowned regatta queen.
History records no further flying saucer involvement with either Donna Christopherson or Barbara Anderson, the two Oregon saucer candidates who flew no higher than second place. There was also no further news located about the saucer-related injury of the boy, Dick Miller, but in the absence of an obituary, we hope the lad had a full and speedy recovery.

As for other UFO business in the area, in the days leading up to the regatta event, some Cottage Grove residents definitely had saucers on their minds. One citizen wrote to the newspaper over concerns that discs were weapons platforms to spread poison.


Another resident had a sighting of something in the sky she was unable to identify - at first.


Closing on a historical note...


There is no Project Blue Book file associated with the regatta saucers. However, it is interesting to see that there is a report from Oregon from the period. It was connected to the Kenneth Arnold sighting, over the same mountains, and said to have occurred on the same day, June 24, 1947. 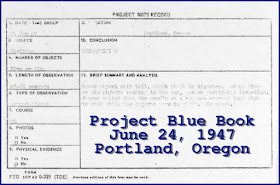 Fred Johnson, a prospector on Mt. Adams, reported seeing five or six disc-like objects banking in the sun, but unlike Arnold’s UFOs, these saucers had tails, and their presence caused his compass needle to go wild. Unfortunately, it wasn’t reported until after the Arnold story broke, so it’s uncertain as to whether Johnson was a fraudulent copycat, or a corroborating witness to the most famous UFO sighting of all time. The Air Force’s conclusion: Unidentified.