In Captured Flying Saucers: July 7, 1947, The Disk that Slipped by the FBI, we looked at how J. Edgar Hoover was upset that the Federal Bureau of Investigation was cut out of a UFO investigation. Along with previous disappointments dealing with the military, that caused the FBI to want nothing to do with flying saucers. Later the same month, the policy, if not the attitude, changed.

(Document on the FBI site: BUREAU BULLETIN No. 42)

The Bureau, at the request of the Army Air Forces Intelligence, has agreed to cooperate in the investigation of flying discs...

You should investigate each instance which is brought to your attention of a sighting of a flying disc in order to ascertain whether or not it is a bona fide sighting, an imaginary one or a prank. You should also bear in mind that individuals might report seeing flying discs for various reasons. It is conceivable that an individual might be desirous of seeking personal publicity, causing hysteria, or playing a prank.

The Bureau should be notified immediately by teletype of all reported sightings and the results of your inquiries. In instances where the report appears to have merit, the teletype should be followed by a letter to the Bureau containing in detail the results of your inquiries. The Army Air Forces have assured the Bureau complete cooperating in these matters and in any instances where they fail to make information available to you or make the recovered discs available for your examination, it should promptly be brought to the attention of the Bureau.

Any information you develop in connection with these discs should be promptly brought to the attention of the Army through your usual liaison channels.

They also noted that there was the potential for UFO hoaxes to be used to breed fear:

"The Army Air Forces Intelligence has also indicated some concern that the reported sightings might have been made by subversive individuals for the purpose of creating a mass hysteria."

One of the USA's greatest concerns about flying saucers were that they were a new weapon of some sort by the Soviet Union, therefore, investigating UFOs was a matter of national security. As a result, saucer sightings were taken seriously, and many FBI agents' reports were written in grave tones, though few cases were of genuine importance.

Shortly after the FBI saucer directive, a report came in from Illinois. Someone had recovered a small disc. The memorandum to headquarters for FBI Director J. Edgar Hoover:

For the Bureau's information a Mrs. xxxxxxxxxxxxx of Saybrook,
Illinois reported to this office the finding of a flying disc
in her front yard at 6:00 A.M. on July 26, 1947.

It appears from investigation conducted by an Agent of this
office that the stability of xxxxxxxxxxxxx is questionable. How-
ever the alleged flying disc was obtained and it is apparently
the concoction of some of the juveniles in the area. It is an
old wooden platter, which has assembled on it a silver plate, a
spark plug, a timer, and some old brass tubing. Photographs
were taken of the same and there are six views enclosed herewith.

No doubt this was someone's idea of a prank.

The disc is presently being retained by the Springfield Office and
will be retained pending receipt of Bureau advice relative to its
destruction. The thought in retaining it was that perhaps the
Bureau might desire to have it transmitted to Washington for any
novel value it might have. 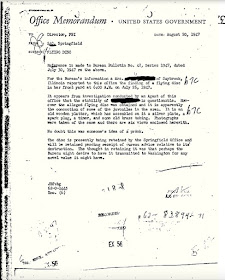 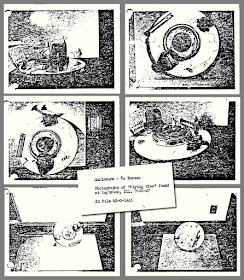 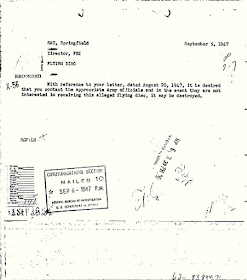 The FBI site has a page on their site about the “Unusual Phenomena” files collection, “The FBI and UFOs: Flying Flapjacks, Saucers, and Saw Blades.” It featured a brief recap of the Saybrook saucer case and displayed two clear pictures of it:

The FBI report failed to mention that the flying disc carried the brand of its purported country of origin: Russia. With the "timer, and some old brass tubing," it looked a bit like a bomb. Had the "Russia" label been published in the media, it might have led to just the kind of mass hysteria the authorities feared, hoax or not. 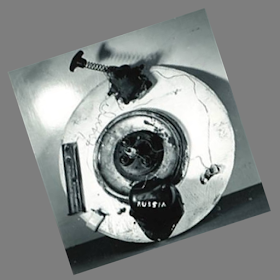 The Saybrook citizen's report seems to have gone directly to the local FBI, and was not covered by the newspapers like so many other flying saucers stories around the same time. Since the FBI's investigation was conclusive, nothing was passed on to the Air Force, therefore this incident is not found in the files of Project Blue Book. In a sense, the case is unsolved. Once the FBI decided it was just a prank by some kids, they were done with it. We'll never know who made the phony soviet saucer or just why.

The FBI was only in the UFO business for a short while. According to their site, a July 1950 FBI statement said that “the jurisdiction and responsibility for investigating flying saucers have been assumed by the United States Air Force... the FBI does not attempt to investigate these reports..."
There were a few exceptions though, but those generally were focused on saucer swindlers, not actual reported UFO sightings.

There were many other early cases of hoaxed captured flying saucers, and the FBI was involved in several of them. See our previous STTF articles, including: Captured Flying Saucers: The North Hollywood Disc, July 10, 1947