The term “mother ship” dates back to at least the 19th century to describe the home sailing ship from which the smaller boats were launched. The military adopted the concept and terminology, as  in a 1922 issue of Aviation magazine that quoted an officer describing plans to use an airship as a flying aircraft carrier: “Just as the aircraft of the Navy are cared for by a mother ship or airplane carrier, so must the Army craft be supplied from an aerial mother ship.”


Where science fiction goes, flying saucers are sure to follow. Early July 1947 saw several “sightings of ‘companion ships’ associated with larger ‘mother discs,’ according to news stories cited in Alfred Loedding and The Great Flying Saucer Wave of 1947 by Michael D. Hall and Wendy A. Connors.

Project Blue Book files contain a report, “Appendix D,” from J. E. Lipp of RAND Corporation Missiles Division to Brigadier General Putt of the Air Force, dated December 13, 1948
“This present letter gives, in very general terms a description of the likelihood of a visit from other worlds as an engineering problem...” In discussing the propulsion of space ships, Lipp wrote:

“Two possibilities thus are presented. First, a number of space ships could have come as a group. This would only be done if full-dress contact were to be established. Second, numerous small craft might descend from a mother ship which coasts around the Earth in a satellite orbit. But this could mean that the smaller craft would have to be rockets of satellite performance, and to contain them the mother ship would have to be truly enormous.” See the file at https://www.fold3.com/image/1/11885469

Donald Keyhoe’s 1950 article in True magazine, Jan.1950 didn’t mention the term mother ship, but touched on the concept: “The sudden spurt of sightings in 1947 might indicate that we have attracted attention.... and that an orbiting satellite base has been established, or re-established after an absence.”

In“Hawthorne People All Saw Something; and Say It Must Have Been Flying Saucers!” from Nevada State Journal April 7, 1950,the story reported that “two of the strange aircraft made their appearance and performed for almost ten minutes high above the town.
“... Most observers expressed the belief that the ‘disc’ planes are radio-controlled because of the tremendous speed and maneuverability would make it almost impossible to have the operation directed by a human pilot. Carrying this theory farther, these observers expressed the belief that the conventional plane which appeared at the same time as the two unidentified objects could be a ‘mother’ ship for the smaller units or at least was associated in the radio control of the flight and maneuvers.”

Harmon W. Nichols, a staff correspondent for United Press, wrote a story about John Matthews, a sales manager for the A. O. Smith company and his thoughts on flying saucers. Matthews had built a few flying saucer models, and Nichols described him as a scientist. From the La Grande Observer June 28, 1950. Mathews thought the objects were vehicles under intelligent control, possibly from Mars from a larger space vehicle:

“People have seen what they thought were flying saucers in the sky, but none has ever landed. My theory is that they are brought down from one of the planets and dropped from a ‘mother’ plane. The up-pressure is so great that instead of falling where we can look at them they go back to the mother ship. Sounds silly, but that is what I think.” 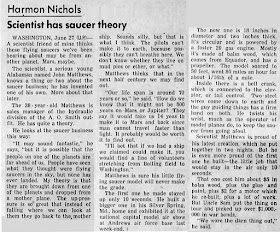 United Press ran a news story carried in many papers on July 6, 1950 about John Keller of Dowagiac, Michigan, reporting that “he saw a low-flying air force C-54 launch a flying saucer.” Most versions ended with a mention that his two young sons also witnessed the event, but the Statesville Daily Record, carried two extra paragraphs with some speculation:

“This report would seem to bear out recently reported theory that the saucers were being launched from a mother ship. The observer expressed the opinion that the saucers never came to land because, in some way, they nullify gravity and thus can allow return to ship which they were launched.

Keller’s report would appear to be the first of an eye-witness of such a launching. It would also appear to cast doubt on the theory the saucers are interplanetary vehicles.”

In Donald Keyhoe’s 1950 book, The Flying Saucers Are Real, he mentioned the concept of a mother-ship, but in the terrestrial military sense, while discussing the possibility that saucers were controlled by the British, based on  captured German technology at the end of World War II:
“Some of the disk missiles were supposed to have been launched from a British island in the South Pacific; others came all the way from Australia. Still others were believed to have been launched by a mother ship stationed between the Galapagos Islands and Pitcairn.”

In the months after the book was released, Canadian scientist Wilbert Smith met and corresponded with Donald Keyhoe, later described in Keyhoe’s 1953 book, Flying Saucers from Outer Space. Of Smith’s saucer notions, Keyhoe said:
“Though he admitted it was pure speculation, Smith also had sketched his ideas of how discs could be berthed on the larger craft. Each mother ship could have small cup-shaped niches in its sides, into which the disc turrets would fit, with the rest of the saucers lying flat against the parent ship's side.” 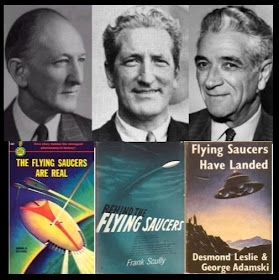 “A widely circulated story that these saucers originated from a mother ship at least ten miles long and more than five hundred miles above our earth, a giant airship thought to be revolving around the earth at enormous speed, but slowing down even so, seemed to derive from Oahspe, according to borderland scientists. This is a book which described Etherians as ancestors of both the Chinese and Aryan races-originators of the Sanskrit language, but long removed as taxpayers on this earth.”

Is Another World Watching? was the US title for Gerald Heard’s The Riddle of the Flying Saucers published in the UK in 1950. Heard thought that a mother ship might be responsible for the tragic death of captain Thomas Mantell in 1948:

“This was a very mother of disks, and perhaps that poetic phrase may be quite near being an exact description — perhaps it was the mother ship in which the smaller craft, like dinghies hauled on board a schooner, can take refuge after their exploratory flights, as Noah's dove came back to rest in the Ark. It may have been anything between seven hundred and perhaps a thousand feet across.”

Speaking of arks, perhaps the first melding of the mothership concept with saucers was in the comic book, Airboy #88, June 1951, which features a little-known UFO story, "The Great Plane From Nowhere!" The 13-page story is about a plane-shaped interplanetary spaces ship that carries a fleet of smaller saucer-shaped scout ships.


“Cool Weather Chills Flying Saucer Reports” from Product engineering magazine, 1952:
“Another expert figures that the saucers are from outer space, visitors from another planet. In his opinion, they are guided missiles controlled from a mother space ship that operates in outer space— much like our idea of a satellite vehicle.”

In the movies, there was a mothership of sorts in the 1953 film The War of the Worlds adapted from H. G. Wells' novel. A meteor turns out to be the interplanetary delivery device for invading Martian war machines. In the photo below, the invaders rise from the crash site. The 1953 book, Flying Saucers Have Landed by Desmond Leslie and George Adamski firmly established the mothership connection with UFOs. Leslie talks about information received from BSRA:


“Lastly, Meade Layne’s group gives a brief account of an immense torpedo-shaped carrier- craft, or mother-ship, a kind of interplanetary aircraft carrier which brings the smaller saucers through space, releasing them when it has entered the atmosphere. Its length they give as about 7,000 feet, with a crew of 2.000; figures which sound quite fantastic.”

In Adamski’s account of his talk with the man from Venus, he states that:

“I laughed with him, and then asked if he had come directly from Venus to Earth in that?
He shook his head in the negative and made me understand that this craft had been brought into Earth’s atmosphere in a larger ship... So I asked if the large craft might be called a ‘Mother‘ ship?
He seemed to understand the word ‘mother ‘for now his nod of affirmation was accompanied by an understanding smile." 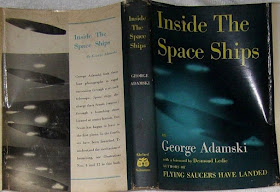 George Adamski claimed to have photographed a Venusian mothership releasing saucers on March 5, 1951, but waited until the release of his 1955 book, Inside the Space Ships to disclose the images to the public. He also revealed an alien told him how their scout ships operated:


“These smaller craft are incapable of generating their own power to any great extent and make only relatively short trips from their carriers before returning for recharge. They are used for a kind of shuttle service between the large ships and any point of contact or observation, and are always dependent on full recharging from the power plant of the Mothership.”

With George Adamski and Donald Keyhoe both supporting the same flying saucer concepts, the interplanetary mothership took its place in UFO canon. Stephen Spielberg found the idea interesting enough that he used the appearance of massive mothership UFO as the climax of his 1977 film, Close Encounters of the Third Kind. From there, the UFO mothership has become a cultural mainstay.